You are here: Home › Two sisters, one beloved school 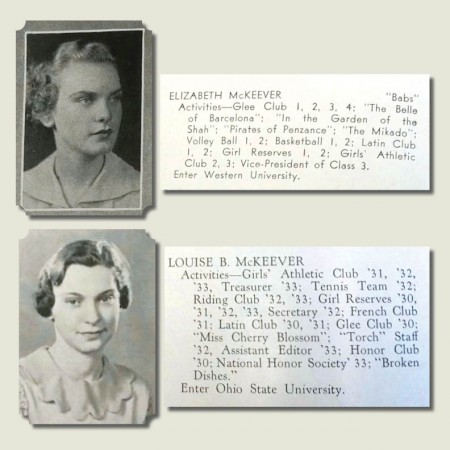 One sister was studious, the other social. They used to tease each other about their differences. “You know, the way sisters do,” said Sarah Kay, granddaughter of Elizabeth “Libby” McKeever Ross and great-niece of Louise “Dede” McKeever McCulloch. There’s at least one thing the sisters had in common, though: both adored Bexley High School. Kay and her family like to think that both would enjoy seeing their names on a limestone bench in front of their high school alma mater.

“My grandmother always attributed Bexley with having taught her about community and the need to give back,” said Kay, speaking of Ross, BHS ’36, who passed away in August.

It was her children’s idea, said Kay, to make a family gift to the BEF in their great-grandmother’s honor, and to include in their gift the purchase of a bench dedicated to both Ross and her sister, Louise (Dede) McKeever McCulloch, BHS ’33. Kay’s daughter Zoë Ziegler, a junior at BHS, said it would make her smile to see their names when entering or leaving the school. “Nana always said that was her most special time, when she was at Bexley High School,” Zoë told her mother. 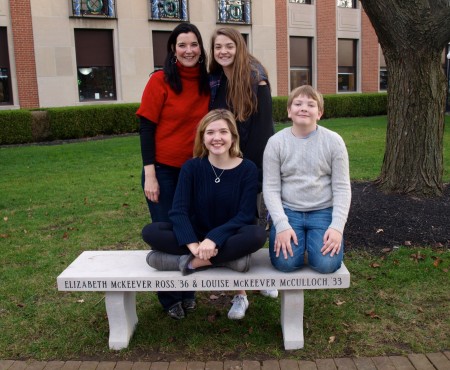 The McKeever sisters were among the earliest Bexley graduates to attend the high school on South Cassingham Road, which was new in 1932. Libby was in Glee Club throughout high school and loved musical theater, performing in such shows as Gilbert and Sullivan’s “Mikado” and “Pirates of Penzance.” DeDe was in the French, Latin and Honor Clubs, and was assistant editor of the yearbook.

“Dede had a livelong love of reading and literature,” said Ms. Kay, adding that her great-aunt, a bookkeeper at her father’s electric company, went on to become an active volunteer at the Bexley Library, and served on its board. She was also a member of several local societies with an intellectual bent, such as the Present Day Club.

Libby, she said, loved music and art. Mrs. Ross, who married Richard M. Ross, president of Ross Laboratories, was the first woman in modern history to be president of the board of the Columbus Museum of Art, and she was a founding board member of ProMusica, as well as serving on other boards. Along with her husband, Mrs. Ross made many charitable gifts that left a significant impact on Columbus’s arts and medical institutions.

Even in her 90s, said Kay, Mrs. Ross attended events at her great-grandchildren’s schools, including swim meets for Zoë, a Maryland assembly for Ian (grade 5) and eighth grader Tessa’s sixth grade graduation. “She was so thrilled that the great-grandchildren were attending the Bexley schools, just as she did,” said Kay.