You are here: Home › Paying “Homage” to Bexley 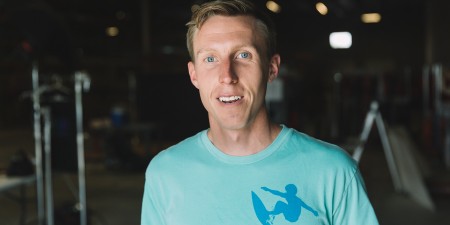 Bexley High School alumnus Elliott May (’02) spent nearly a decade after college raising funds for environmental and arts organizations, and he’s always remembered a key lesson from his senior project: supporting a great cause can involve much more than writing a check. When you bring a nonprofit organization and a donor to the same table, said May in a recent interview, “the challenge is to bring the two together in a way that makes something bigger.”

Senior year, May and friends Jimmy Hughes and Geoff Serednesky (also class of ’02) did just that when they organized an ultimate frisbee game between seniors and alums to support the new turf on the BHS football field. The event raised thousands of dollars for the upgrade; it also engaged local businesses with the school, enhanced school spirit, and created a great memory for all involved.

A graduate of Dartmouth College (history and classics), May returned to the Columbus area in 2012 to join the team at Homage, the hugely successful apparel company founded by Bexley native Ryan Vesler. May and Homage recently brought the same goals–education, collaboration, storytelling, and fundraising–to a project in support of the BEF: a Goosebumps-themed Bexley tee shirt. The shirt would celebrate the new Goosebumps movie about R.L. Stine, let the world know that Stine grew up in Bexley, and raise money to support excellence in the public schools where it all started for both Stine and May. Homage has pledged to donate royalties from sales of the shirt to the BEF.

May said that Homage’s Bexley roots run deep. May, Vesler (a Columbus Academy grad), and Bexley grads Jason Block ’01 (President) and Steve Werman ’01 (VP for Finance and Strategy) all grew up here. “We had all grown up spending time in thrift stores and baseball card shops,” said May. For Vesler, that interest led to reselling vintage collegiate shirts on eBay, and then, quickly, to creating his own product lines.

For the record, May says Vesler played for the Bexley alums in the 2002 ultimate frisbee game. He was the “one allowed exception,” chuckles May, who recalls that the game ended in a tie.

May says that in 2012, having watched his friend take the small business he’d started in 2007 in his parents’ basement to retail outlets and a national mail-order business, “I wanted to be a part of that passion.” May now handles licensing and partnerships for Homage. When an intellectual property has no owner, he says, Homage looks for an opportunity to donate royalties to a relevant organization. Homage created a national, licensed Goosebumps tee tied to the movie, which came out this fall. The Bexley version of the shirt, however, did not require a license–that’s why May reached out to offer the royalties to the BEF.

“The opportunity to honor our community is one we care deeply about,” said May. “Bexley is an area that we all call home, and we had a great experience there.” 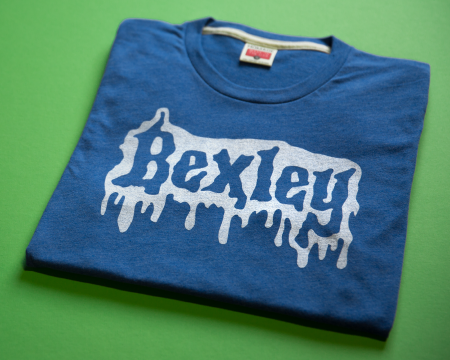 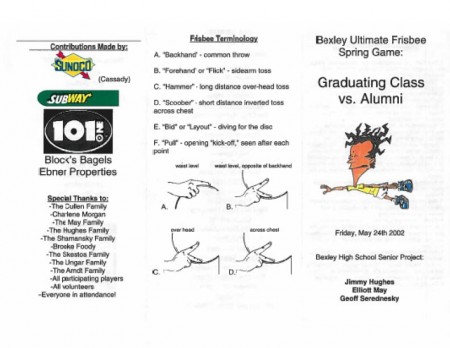 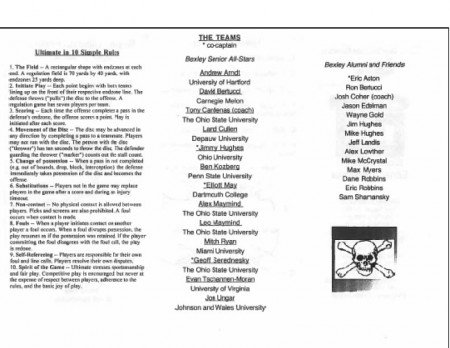