You are here: Home › Mom raises 4 surgeons in Bexley home after husband’s death 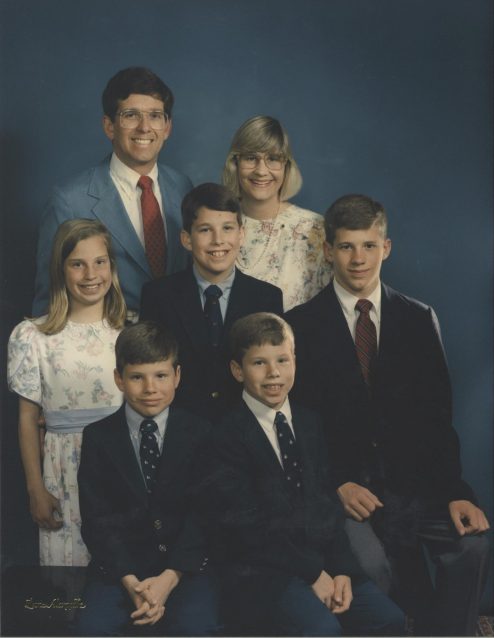 From The Columbus Dispatch by Ken Gordon – After her husband’s sudden death, Molly Henn managed to put her boys through college and medical school. The youngest just accepted a position with Ohio State University’s Wexner Medical Center.

The way Lucas Henn sees it, when his father died unexpectedly in 1993 — leaving behind five children ages 10 to 15 — his mother had two choices.“She could fold and say, `Woe is me, I can’t do anything,‘” Henn said. “Or she could step up and be ‘Superwoman,’ and that’s what she did.”

The proof is in the results.

When Matt Henn recently accepted a position as a cardiothoracic surgeon at Ohio State University’s Wexner Medical Center, it meant that all four of Ralph and Molly Henn’s sons have become surgeons.

Frank, 42, is a sports medicine orthopedic surgeon at the University of Maryland; Lucas, 40, is a cardiothoracic surgeon at a hospital in Youngstown; and Curt, 37 (and a twin of Matt) is an orthopedic hand and elbow surgeon at Georgetown University in Washington, D.C.

“This is a really rare thing; it almost seems fake that it actually occurred,” Lucas said. “To have one person in a family become a surgeon or doctor is a great achievement. But to have all of us go through what we went through and come out the other side as successes, to me is a testament to all the sacrifices Mom made.”

Molly Henn, 71, who raised her family in Bexley who now lives on the East Side, is hesitant to accept a superhero cape for her efforts.

“I mean, you don’t have a choice, you just do it,” she said. “I had worked hard for 15 years at that point (when Ralph died) to make sure all the kids turned out OK. I wasn’t going to stop.”
The kids might have had some help from their family background.

Molly’s family is chock-full of doctors, including her father, Clarence Gallagher, a longtime general practitioner in Columbus who helped deliver thousands of babies.

Both Molly and Ralph went to medical school and became psychiatrists, starting practice in Columbus in 1978, the year Frank was born.

Four more kids followed in the next five years.

Their daughter, Katie, was born with congenital heart disease and underwent numerous surgeries while still young. The toll of those operations left her without the stamina to withstand the rigors of advanced schooling, although she did attend college as a pre-medicine major for more than a year. Now 38, she lives in Blacklick.

The Henns say that no one pressured the kids to go into medicine. But it was clearly something Ralph in particular hoped his children would choose.

“Ralph felt like in medicine, you really are helping people, and there’s a gratification to that,” Molly said. “People are thanking you, really, for saving their lives.”

Matt and Lucas both said that seeing their parents having fulfilling careers was an influence.

“I definitely don’t think it was a foregone conclusion that we would all go into medicine,” said Matt, who recently moved to Upper Arlington and will begin working at OSU this month. “It was encouraged. And we saw that both of them were happy in the field, as well.”

And then tragedy hit the Henn family. While on a family vacation in Wisconsin in 1993, Ralph Henn was water skiing when he suffered a heart attack. He made it back to the dock before losing consciousness, and never regained it. He was 45.

“We woke up to go water skiing and four hours later, Mom is telling us he’s gone forever,” Lucas said. “It was an absolutely surreal thing. There’s no way to prepare for it and recover from it.”

Molly said she simply kept on doing what she had done: pushing her kids to do their best.

She had help from Frank, who within a year of Ralph’s death had his driver’s license and helped chauffeur his siblings to sports and activities. Molly also said she thought sports helped give the boys structure, and some of their coaches were also good role models.

The only self-congratulatory pat on the back Molly gives herself is putting the four boys through college and medical school.

“My one claim to fame is I did get them all through,” she said.

Her kids think she deserves a few more accolades.

“Her personal perseverance was incredible, looking back on it,” Matt said. “I can’t even imagine what she went through, and I can’t say enough about what she did for us.”

photo credit to The Columbus Dispatch, courtesy the Henn Family

See the original article on The Columbus Dispatch