You are here: Home › Mike Altman to speak at Bexley High School Commencement 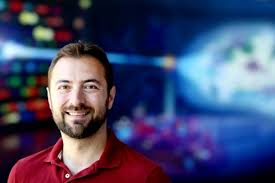 Mike Altman BHS ’95 is the 2017 Bexley High School Commencement Speaker. Mike is Character Technical Director at Pixar Animation Studios in Emeryville, California, where he worked on Inside Out. He graduated from Columbus College of Art and Design in 2000 with a Bachelors of Fine Arts and delivered the Class of 2011 Commencement Address. Mike also holds a Master’s in Fine Arts from The Ohio State University.

As Technical Director, Mike deals with the specifics of CG (computer graphics) movie production, modeling, animation and layout. According to an interview with OC Weekly, Mike’s day is split between art, characters and sets, depending on what the project needs. In a 2013 interview with the The Columbus Dispatch, Mike revealed he “works closely with technical leads and art directors to create fully realized environments.”

Mike recalled that he was always the artist among his classmates. “I was obsessed with Saturday morning cartoons and drawing and painting,” he said, and by the time he was in college Pixar had won the academy award for Toy Story. “I couldn’t imagine doing anything else with my career… I applied to Pixar at least five times over the course of ten years.”

He has been with Pixar since 2008, and told OC Weekly that it was a “long-time dream come true.” He told the The Columbus Dispatch that in his day-to-day work, he uses the basic art building blocks and thanks CCAD for the strong art foundation and says, “I am in the place I am now because of the strong foundational education I got at Bexley.”

Previously, Mike worked for animation houses DNA Productions in Dallas and LAIKA in Portland, where the versatile techniques he picked up allowed him to become a more-rounded artist. His previous work includes Toy Story 3, the short Day & Night, and The Good Dinosaur.