You are here: Home › Michael Kilbourne Honored as Ohio Library Council Trustee of the Year 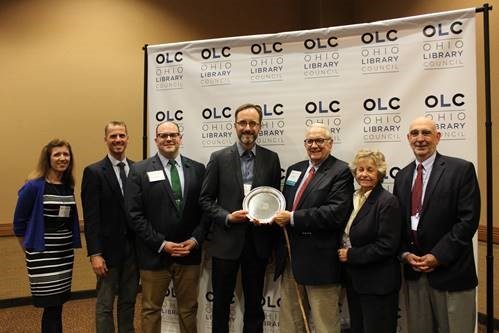 Few candidates have met the “sustained commitment” requirement for “Trustee of the Year” quite as fully as Mr. Kilbourne, who has served on the Bexley Board of Trustees for 41 consecutive years, including eight years as Board President. His career spans a great number of library innovations, and he repeatedly pushed for the library to stay ahead of current trends, leading the Board in supporting their system’s initial purchase of computers, automation of their ILS, and expansion of the AV department to include emerging technologies.

In his remarks at the ceremony on Wednesday, Mr. Kilbourne reflected on his 41 years as a board trustee, his childhood in Bexley watching his father serve as a library trustee, and his first job as a page or “shelver” for the library. He commended the audience of library directors and librarians from across the state because they “listen well.” He stated, “I think that will be the survival of libraries in the future, because you all listen well.”

Perhaps his strongest legacy of foresight and leadership is his passion for learning and improvement. He has consistently pushed the Board to support professional education for library staff, and encouraged both the staff and Board to take an active role in state and local organizations. Mr. Kilbourne’s career has included insightful leadership through numerous challenging situations such as a building fire, appealing Public Library Fund calculations, facility renovations and local tax levies, but his sustained commitment over the past four decades to addressing problems with an eye to the future is what has distinguished him among his peers.

Mr. Kilbourne is a graduate of the Bexley High School Class of 1955.