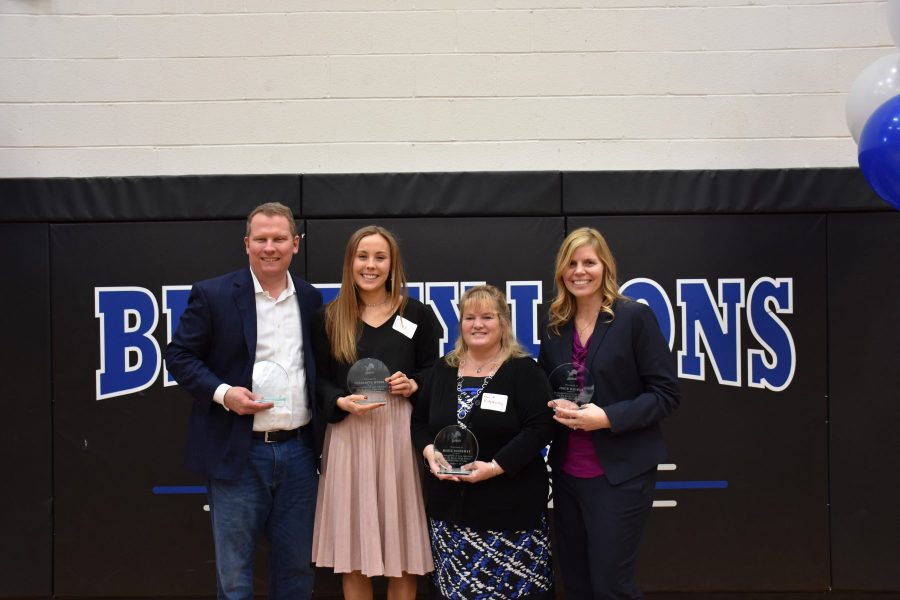 The Bexley High School Athletic Hall of Fame induction event on January 7, 2017 was held for the first time ever in the BHS Gene Millard Gymnasium. The Class of 2016 Inductees Kevin Seckel ‘90, Marie Ridgeway ‘84, Sam McCandlish ‘60, Jodie Bauman ‘88, and Charlotte Myers ’11 were recognized for their outstanding achievements and awards in Bexley athletics. They joined 93 other Hall of Fame members, including Bud Susil ’47.

“The brunch inducting the most recent class to the Bexley High School Athletic Hall of Fame was a great event.  It was an honor to celebrate the best of Bexley Athletics and to allow multiple generations of alums, coaches, and community members to connect and reminisce about the many experiences that make Bexley High School a special place.  Thank you to the Alumni Association committee, and the Hall of Fame committee for hosting this event,” said Jen Bunker ’92, who was inducted into the Hall of Fame in 2005.

Matt Palmer, co-chair of the Hall of Fame committee, provided congratulations and recognition to the five honorees and thanked the 19 members of the committee for their dedication to the process. He also thanked the Millard Family for setting up the Rebecca Ann Millard Attwood Fund, which provides funding for the Athletic Hall of Fame. Eli Goldberger, Director of Bexley Athletics, also congratulated the inductees and recognized the Millard family as the “connection of Bexley High School athletics.”

“The people being inducted in this year’s class represented not only what they accomplished Tnot only at BHS but also what they have done since then, and I love that it transcended 41 years, from the class of 1960 to 2011,” said Sue Ramsey ‘74 and 1991 Hall of Fame inductee, commenting on the breadth of athletic commitment of Bexley. “It was a great time to be back.”

Though one inductee, Sam McCandlish ’60, could not attend the ceremony, his award was accepted on behalf of Matt Palmer who read remarks prepared by McCandlish. Sam’s friend, Tom Tussing shared that Sam was “outstanding at all things.” The spirt of Bexley was present during the entire ceremony, with each inductee thanking their former teammates and acknowledging that their accomplishments would not have been possible without the support of family members, teachers and coaches.

Hall of Fame plaques can be viewed in the Lion Lobby. The next class to be inducted will be 2019.

To see more of the Athletic Hall of Fame, click here