You are here: Home › From Bexley to best-selling author 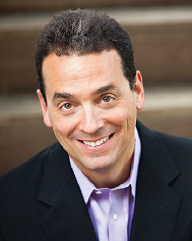 Growing up in Bexley, Daniel. H. Pink said his childhood was filled with “team sports, public libraries, and sitcoms.” He graduated from Bexley City’s Bexley High School in 1982.

“Working on our school newspaper, The Torch, I learned how to write for a real audience of readers rather than for just one teacher,” Pink said. “The experience changed the way I thought about writing and is one reason I became a writer.”

From that public school foundation, Pink went on to reach the top of the writing world by penning three New York Times best-selling books: Drive: The Surprising Truth About What Motivates Us; A Whole New Mind: Why Right-Brainers Will Rule the Future; and To Sell is Human: The Surprising Truth About Moving Others. He has written five books on business and human behavior, which have been translated into 34 languages and sold more than 2 million copies worldwide.

Pink also is host and co-executive producer of “Crowd Control”, a TV series about human behavior that airs on the National Geographic Channel.

“Being able to reach audience in a fun way to talk about behavioral science,” Pink said, when asked to comment on the most rewarding part of working on “Crowd Control.” He also said he felt “lucky, grateful and relieved” when his first book became a best-seller.

After high school, Pink earned a bachelor of arts degree from Northwestern University, where he was a Truman Scholar and elected to Phi Beta Kappa. He later received a law degree from Yale Law School, where he served as editor-in-chief of Yale Law & Policy Review.

Deciding not to practice law, he went on to serve as an aid to U.S. Secretary of Labor Robert Reich, and from 1995 to 1997 was chief speechwriter for Vice President Al Gore. In 1997, he quit his job to go out on his own, an experience he described in the 1998 Fast Company magazine article, “Free Agent Nation,” which became the basis of his first book.

Pink now lives in Washington, D.C., with his wife and three children. He has a younger brother and sister who live in the New York area, yet he still has strong ties to his Bexley roots and pride in his hometown.

“My mother still lives in Columbus and my family and I do get back to visit her,” Pink said. And, in a tweet from Pink to a Columbus native he wrote, “Bexley High. All roads lead to central Ohio.”

Educational inspiration– “Peg Zidonis, the school’s newspaper adviser, gave students enormous autonomy to come up with story ideas and execute them as they saw fit. She ensured that it was a student paper- and that made it a better paper.”

Giving back– “I serve on the Board of Directors of Big Picture Learning, a nonprofit that aims to bring innovative educational practices to struggling schools and low-income students.”

< Better together: Alumni Association merges with BEF under BEF umbrella
The Deep, Dark Secret Of R.L. Stine: ‘I Never Planned To Be Scary’ >