You are here: Home › Follow your heart and eat your vegetables, alum tells grads 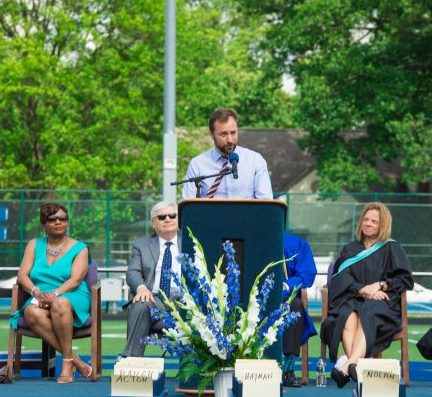 Bexley alum Mike Altman ’95 had some pointed advice for the BHS class of 2017 when he appeared as the featured speaker at commencement on May 28. Follow your heart, he told them. Learn new skills. Be good to yourself. Eat your vegetables.

In a wise and humorous commencement speech, Altman shared lessons from his own journey from an OSU freshman majoring in architecture and pre-med studies to his current position as Character Technical Director at Pixar Animation Studios. At Pixar, Altman has worked on such films as “Inside Out” and “Cars 3,” to be released June 16.

“When I left Bexley High School, I could not have imagined myself with the career and life I have now,” said Altman. Struggling with his choice of major, he decided to add an elective as a relief from his academic load: introduction to 3D sculpture.

“Enrolling in that class changed the course of my life. I found myself going to the lab, working on my assignments through the weekends, forgetting to eat, just totally fascinated by creating artistic 3D forms in the computer.Time simply melted away, and so many years later I’m somehow still doing it today, building characters, sets, and environments for our films at Pixar.”

Altman transferred to Columbus College of Art and Design, where he graduated in 2000 and returned as commencement speaker in 2011. He earned an MFA degree at Ohio State.

In his speech to Bexley’s Class of 2017, Altman told them to take care of themselves—exercise, make your bed and start a savings account, he said, along with eating vegetables. He advised them that details matter when trying to make a good impression, especially when applying for jobs. He said lifelong learning will have unexpected rewards, and he encouraged the grads to be their own best cheerleaders. “We often forget that the most important relationship we have in life

is the one to ourselves,” he said. “So bring out the loving, encouraging and kind voice and turn down the volume on the self-criticism, judgements, and doubt.”

Finally, Altman told the grads that talent is overrated and devotion and persistence will be rewarded. Find the thing that, like his 3D sculpture class, fascinates and fully engages you, and pursue it.

For the full text of Altman’s speech, click here.