You are here: Home › Distinguished Alumnus fights the spread of HIV 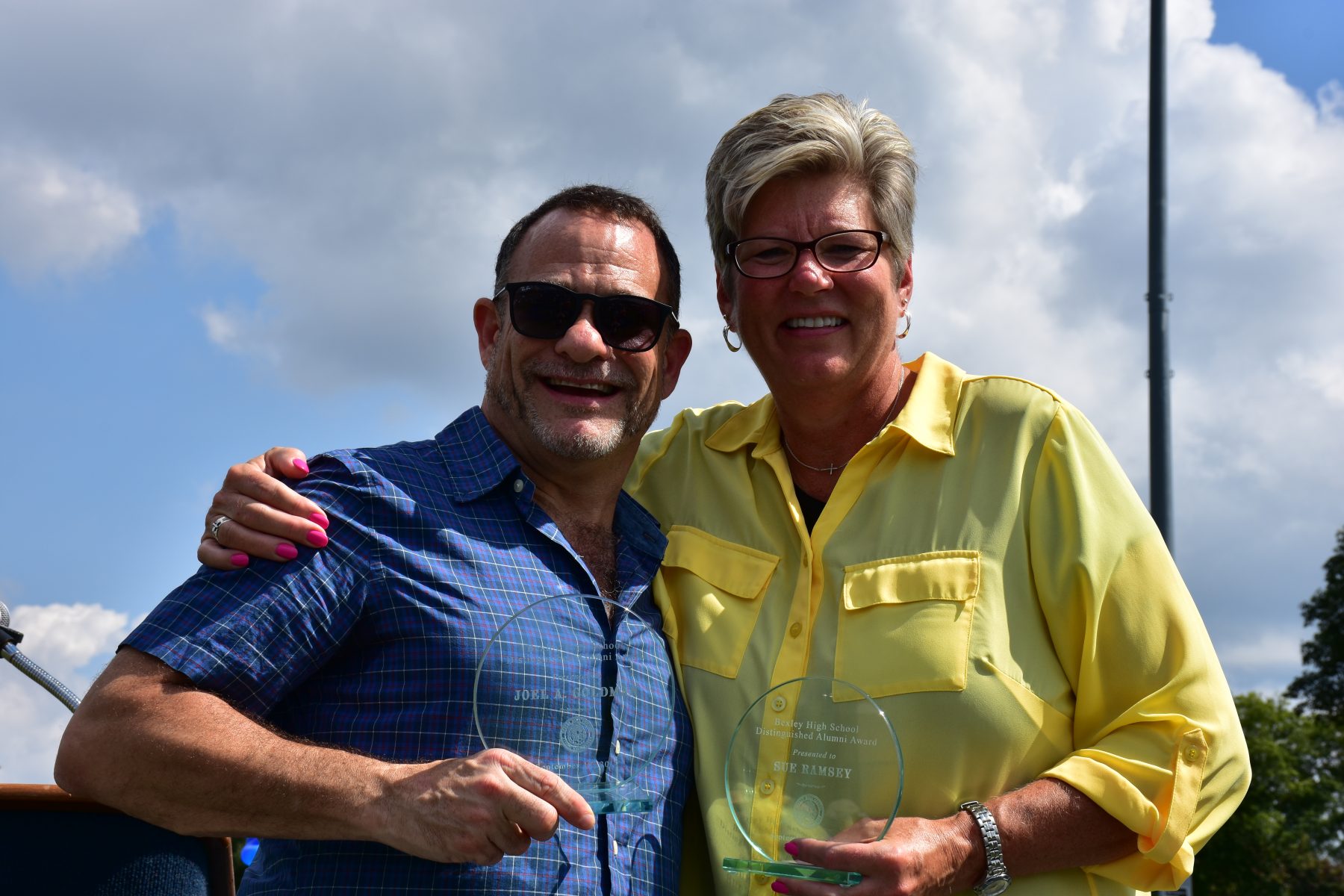 As the managing director of the Elizabeth Taylor AIDS Foundation (ETAF), Joel Goldman, BHS ’81, moves easily in the celebrity world of Los Angeles. But it’s his Bexley roots that laid the foundation for his work connecting celebrities to important causes, Goldman said last month as he accepted a Distinguished Bexley Alumni Award. He was one of six Bexley High School alumni honored by the Bexley High School Alumni Association in a September 17 ceremony on the Carlton Smith Field.

In his acceptance speech, Goldman described a 2006 meeting with actress Brooke Shields and her publicist. When he told them he was headed home to Bexley, Ohio for a high school reunion in which he and his classmates would ride on a flatbed truck in the town’s July Fourth parade, they told him it sounded like a scene from a Hollywood movie, not a real town.

So at their next meeting, Goldman showed them photos he’d taken from his perch in the parade: images of people waving from lawn chairs and children leaping for candy. They were charmed.

The publicist, said Goldman, “always said to me that of all the people she works with I seem to be the most grounded.” Goldman responded by “connecting the dots.” “It’s because of what you see in those pictures,” he told her. “It’s because of the community I grew up in.” Goldman notes that he did not move to Bexley until he was in tenth grade, yet it became the place that feels like home. “I loved how I felt welcomed,” he says. Goldman describes fellow BHS graduates Dan Pliskin and Chris Buckley as his life-long friends.

Goldman was hired as the first managing director of the ETAF in 2013, two years after the death of the legendary actress who established the foundation and whose estate continues to fund it through a portion of the royalties from her name and likeness. The organization focuses on expanding access to treatment in marginalized communities and reforming laws that criminalize HIV. The end goal of both drives is reducing the spread of the virus.

It’s a goal that is very much in line with Goldman’s life work. He was diagnosed with the AIDS virus in 1991. Treatment at that time was not nearly so advanced, and Goldman, just a few years out of Indiana University, was given only a few years to live. He left his job at the national office of his fraternity, Sigma Alpha Mu, and with a friend embarked on a cross-country educational tour called “Friendship in the Age of AIDS.”

With the development of anti-retroviral drugs, Goldman’s life expectancy changed. The tour ultimately stretched over 11 years and 1,000 campuses, reaching over a million students.

Goldman continued that work at the Elizabeth Glaser Pediatric AIDS Foundation, where he recruited actors and other celebrities to help with fundraising efforts on college campuses. He brought that same model to Second Harvest, the hunger relief initiative that became Feeding America, where he also developed marketing partnerships with such brands and companies as the “Survivor” program.

Following that, Goldman became Director of Entertainment Industry Relations at Malaria No More, where he learned about fighting disease Africa—the last piece of experience that prepared him for his current role at the Elizabeth Taylor AIDS Foundation. The organization has focused resources on a region of Malawi where they hope to prove that improved access to treatment can stop the spread of the HIV virus.

“Everything I’ve learned from every different organization I’ve worked for is coming into play in this amazing way,” says Goldman. “I feel like I have a Crayola crayon box of 100 different colors. There’s so much more you can do!” And he is doing it, most recently  fine-tuning details of a $25,000-a-plate fundraiser involving singer Annie Lennox, fashion designer Zac Posen, and model-actress Paris Jackson

Thanks to the treatment he receives, Goldman is healthy and working to extend the life expectancy of others. Last year, he married his partner of ten years. His mother, Seena, still lives in Bexley and Goldman visits her often.