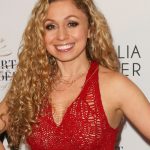 Natalia Fedner is a couture designer based in New York and Los Angeles. After graduating from BHS, she attended and graduated from Parsons School of Design, spending part of her studies learning haute couture techniques in Paris.  Her Junior year at Parsons, Natalia received the Silver Thimble Award for best collection. Her Senior year, her designs were featured in the Saks Fifth Avenue Holiday Window Display.

Natalia came to the United States as a refugee from Ukraine when she was 9 years old. She’s grateful for the education and opportunities she received at Bexley and works to use her talents to better the world in various ways including sustainability, social justice, and animal rights. Natalia is vegan and is passionate about animal rights. All of her designs are made using cruelty-free materials. She is also an advocate for sustainability and often “up-cycles” materials for her designs. What also distinguishes Natalia is that having been a strong student in math and the sciences, she draws inspiration from these areas and incorporates them into her materials and designs.