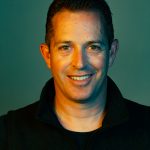 Brett Kaufman is the founder and CEO of Kaufman Development – Brett has been working in the real estate industry for over 20 years, with a focus on investment, banking and development. He has received numerous awards for his professional accomplishments, including being recognized twice as the developer of the year by the Building Industry Association, as well as entrepreneur of the year by the Ernst and Young Association in 2014. The Kaufman Development team runs numerous communities in Columbus, and Brett is recognized as one of the top 50 business leaders in the region for his ability to drive innovation within his organization as well as for his impact on the community at large.

Not only is he a successful developer in Columbus but he boldly made a speech about trauma he suffered while growing up in a speech he made before the Columbus Chamber of Commerce – and started a podcast called Gravity letting others have a platform to share their stories, giving permission to be open, honest, and done in a safe space. He gently guides the discussion in a way that is soothing for his guests and relates to their stories by being open and honest about his own experience. He was brave to come forward, in that forum, in such a public way – and doing so unapologetically.