Staci Blanchard ‘87 got married to Bruce Aldrich ‘78 in Costa Rica in June. 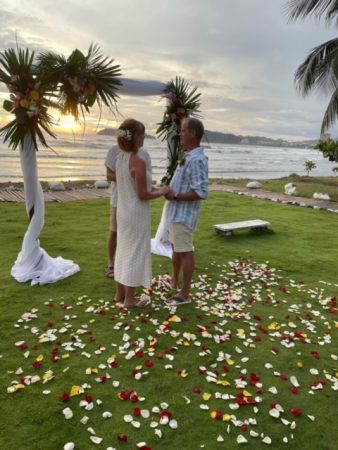 Rick Harris ’78 and his wife, Heidi,  twin 14-year-old sons, Alex and Ben, (and puppy Pippin) send greetings from Houston, Texas. Following stints in Boston, Park City, Utah, and Fort Lauderdale, Florida, they now call the Lone Star State their home, where Rick oversees a frozen appetizer and snack company called Chung’s Gourmet Foods.   Chung’s markets its egg rolls and other products to major grocery chains around the US and Caribbean.

Rick attended his 30th Harvard Business School reunion in Boston in June. Heidi and the boys keep their “New England roots” by spending each summer in Wellfleet on Cape Cod (and Rick tries to get out there as much as possible).  This August the entire family was able to stop in Columbus for the “obligatory trip” to Rubinos and the Ohio State Fair.

After over 40 years in the Internet industry, I was preparing to retire and face life-threatening heart surgery (for hypertrophic cardiomyopathy) when I started on a new drug in a clinical trial.  Within a week, not only were all my symptoms gone, so was my lifelong heart murmur and, most amazingly, so were physical limitations that had limited my athletic ability all my life, but that I never knew were caused by a heart defect.  At 64, I can now run more than I ever could when I was a child and was always chosen last for athletics!  Full of newfound energy, and happier and in better shape than I’ve ever been in my life, I have un-retired and returned to the faculty at the University of Michigan School of Information, where this fall I am teaching a course entitled “How to Change the Internet”.

Beth Tornes (‘73) had her fourth collection of poetry, Northern Skies, published by Muriel Press in June. She will be reading at the Bexley Public Library at 7 p.m. on November 29th.  She lives in Lac du Flambeau, northern Wisconsin.