You are here: Home › BHS education contributes to alumnus success 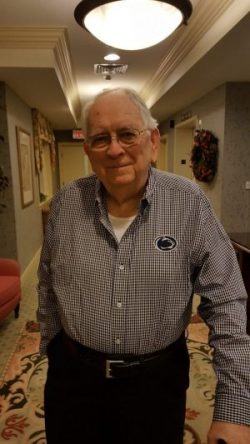 Richard Ruth, BHS Class of 1945, was taught from an early age the value of a good education. Growing up during the Great Depression, just on the outskirts of Bexley, Richard worked nearly every day. His mother, a graduate of The Ohio State University, and his father, a railroad worker, knew what a good education could do and made sure that Richard had the opportunity to attend Bexley High School rather than attending the high school in his neighborhood.

Julie Ruth, Richard’s daughter, said “My dad really attributes his success to Bexley.” Though Richard struggled at first, knowing only his older cousin Imogene, the high school librarian took Richard under her wing. He would spend every lunch period in the library reading books she picked out of for him. With this extra tutelage, he soared.

Richard split his time between school and working two jobs, at the drugstore and the railroad company with his father. “He saved up money [to buy his] car while he was in high school,” Julie explained. It was this work ethic that propelled Richard further. After graduating BHS, he attended The Ohio State University for a year before joining the Army at the end of World War II. With the help of the G.I. Bill, he re-enrolled at OSU in a five-year electrical engineering program, earning his degree. Richard developed 23 computer patents and worked for a number of companies, including Motorola and General Electric. He traveled all across the world for work, but never forgot his love of Bexley.

“I’m convinced, after listening to stories for years about how much he loved Bexley, how different his life would be if he’d gone to a different high school,” Julie said. Richard made sure to attend reunions and reconnected with his classmates there for many years until his failing health no longer allowed. “It was a big deal for him,” she said.