You are here: Home › Bexley native lands role on ABC sitcom ‘The Goldbergs’ 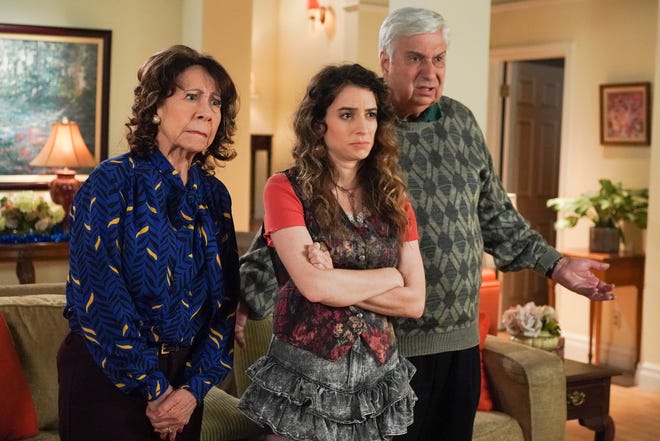 Article reprinted from the Columbus Distpach.  Photo caption: Bexley native, Beth Triffon, center, appears with Mindy Sterling and Ken Lerner, in an episode of “The Goldbergs” that aired in December 2020. Richard Cartwright, ABC

At around 7 years old, Bexley native Beth Triffon had a life-defining moment during summer camp at Columbus Children’s Theatre.

“I was doing some sort of comedic monologue about Snow White complaining about how much work it is to clean up after the Seven Dwarfs,” Triffon said. “I just remember doing it in front of all the parents and they all started laughing. And I thought, ‘This is the best feeling I’ve ever had in my short life.’ It was a magical moment, and I didn’t look back.”

Today, Triffon is now an established Los Angeles actress, and will be making millions laugh on the ABC sitcom “The Goldbergs.” Her recurring guest role began on Wednesday. She expects to return for a couple more episodes in the future.

Now in its eighth season, the show is set in the 1980s and follows a family living in Jenkintown, Pennsylvania. Triffon portrays Joanne Schwartz, the sister of Geoff Schwartz, who is dating the Goldbergs’ college-age daughter, Erica. Last Wednesday’s episode featured Erica’s visit to the Schwartz home for Hanukkah.

“The cast of ‘The Goldbergs’ was probably the nicest group of cast and crew I’ve ever worked with,” Triffon said. “They are total pros and so much fun to be with.”

Back in Columbus, Triffon’s mother, Barb Jenks Triffon, shared the news in a neighborhood community group on Facebook.

“We always knew this was going to be a very big adventure for Beth,” she said. “Following a dream is hard work and we are proud of her perseverance. … She has entertained us for a lifetime.”

When Triffon was getting her start Columbus Children’s Theatre, she stood out to former artistic director Bill Goldsmith.

“Beth was always fearless,” he said. “She would try anything you suggested onstage. … She always had a presence. You can’t teach that.”

Continue reading this story on the Columbus Dispatch.
< Alumna Speaks on Water Conservation
Tech Over Time >