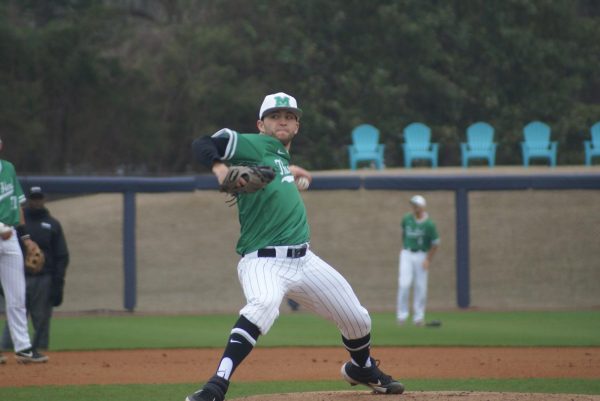 by Scott Hennen from ThisWeekCommunityNews – Joshua Shapiro was watching television at his home in Bexley on June 5, waiting for his shining moment.

The 2015 Bexley High School graduate was monitoring the Major League Baseball draft when he stepped out of the room for a second before hearing the news from a familiar voice at 5:15 p.m.

“I heard my 16-year-old little sister, Emma, scream, ‘Oh my God, it’s happened,’ ” said Shapiro, a left-handed pitcher from Marshall who was drafted in the 34th round (1,033rd overall) by the Milwaukee Brewers. “It’s something I have always dreamed about.

“I have been playing baseball probably since I was 2 or 3. I started pitching basically when my dad (Mick Shapiro) saw that I was left-handed.”

“I thought I was going to get drafted because I had been talking to several teams,” said Shapiro, who was second-team all-Conference USA this spring. “I had talked with Milwaukee (on June 4) and several other teams earlier in the day (June 5) and was just watching TV all day to see if it happened.

“I had a good all-around year (at Marshall) and I think being left-handed, my control and my pitch ability had a lot to do with (being drafted). I’ve always had good control and I can throw any pitch at any count.”

As a senior at Bexley, Shapiro was the MSL-Ohio Division Player of the Year and first-team all-district, going 6-0 with an 0.51 ERA, 89 strikeouts and 15 walks in 41 innings.

As a freshman at Marshall, he appeared in 19 games with 10 starts, going 4-5 with 55 strikeouts in 65 innings to make the Conference USA all-freshman team.

“The biggest thing I learned (at Marshall) was learning how to fail,” Shapiro said. “I never had a lot of problems in high school, so I had to figure that out.

“My freshman year (at Marshall) was kind of crazy. I got some midweek starts and even got a few weekend starts. It allowed me to get used to the different level of play. I had some ups and downs as a sophomore and had some rough spots where I had to be mentally tough. Then I came back and had a decent junior year heading into my senior season.”

Entering his junior year, Joe Renner became the pitching coach for the Thundering Herd and helped Shapiro add to his repertoire. Shapiro said he “was pretty much a fastball-slider pitcher in high school,” but he added a curveball and change-up to give him more to work with on the mound.

“Joshua’s change-up got better, but his senior year was probably his most healthy,” Renner said. “He was throwing 84-87 (mph on his fastball) as a junior and now it’s 87-90, and the biggest factor was his health. He made 15 starts (this spring) and 13 were really good.”

Shapiro throws two-seam and four-seam fastballs as well as a slider, curveball and change-up.

“My out-pitch is definitely my slider, which I have been throwing since I was 12,” he said. “It breaks into right-handed hitters and away from lefties.”

Renner said Shapiro has a lot of the qualities that scouts look for, including being smart and a bulldog on the mound.

“Joshua is a lefty that commands both sides of the plate, has two quality breaking balls and a really good change-up,” Renner said. “He’s a smart kid and he’s a lefty who can get his fastball in on righties. A lot of lefties struggle with that, but that’s his strength. He can also throw his curve for strikes when he needs it and his slider is an out-pitch.

Shapiro majored in accounting, earning his undergraduate degree last year and completing his first year toward a master’s degree.

He left June 9 to sign with the Brewers and join one of their rookie league teams in Arizona.