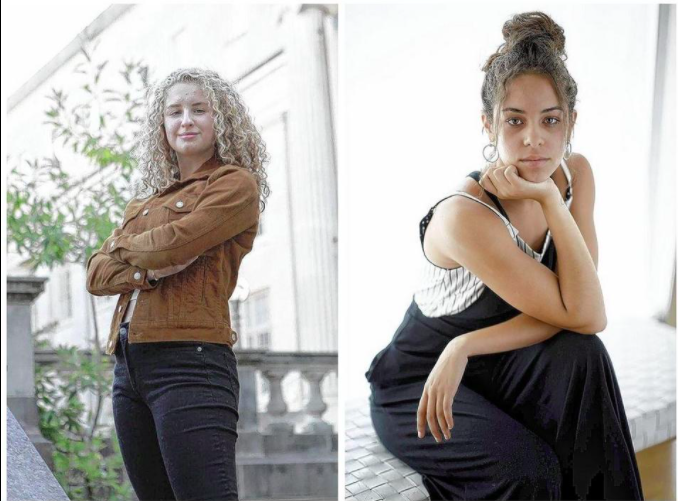 Members of the Bexley High School class of 2020 will embark on a variety of higher learning and career paths, including classmates and childhood friends Ella Hayden and Rayne Wilson, who are planning to enroll in military academies to prepare them for careers in the armed services.

Hayden has been accepted to the U.S. Naval Academy in Annapolis, Maryland, and Wilson will attend the U.S. Coast Guard Academy in New London, Connecticut. Both new graduates said although they were inspired by men in their family who have served in the military, they’re planning to forge their own paths.

Hayden said she became interested in joining the U.S. Navy in 2016 while visiting the academy with her father, Patrick, who is a captain in the U.S. Navy Reserve.

“I went to a Navy women’s basketball game when I was in eighth grade,” she said. “I saw the school, and I saw what it stood for and what it meant and I liked that.”

During that initial visit, Hayden said, she met a female detail squad leader who encouraged her to consider a military career.

“Women are vastly underrepresented in the military, and she encouraged me to do something about that,” Hayden said.

Hayden said she is still deciding whether to make a long-term career of naval service.

“I plan to go into naval aviation,” she said. “From there, I’ll figure out what I want to do and whether it coincides with the Navy.”

Hayden said she appreciates the support of her family, which includes her mother, Marguerethe Jade, and older brother, Riley Hayden, an Ohio State University student.

Patrick Hayden said he’s especially proud of his daughter because rather than relying on him, she did all of the research, preparing for interviews and legwork required to apply to the Naval Academy herself.

Application to the service academy is a process that requires filing forms, seeking a nomination from U.S. Representatives or U.S. Senators, undergoing a fitness assessment and an interview, according to usna.edu.

“She is very resourceful. She is one of the most disciplined people I’ve ever seen in my life,” he said. “Once she is focused, she is very determined. She’s got great routines, great strategies. She applies them to reach her goals.”

“As soon as I hit 10, I realized this is what I want to do, follow in my brothers’ footsteps,” she said.

“I wanted to carry on the family tradition.”

Wilson’s mother, Kelly Muir, said she is proud of her daughter for staying focused on her goal since the seventh grade.

“Every seventh-grader says ‘I want to do this’ or ‘I want to do that.’ She never took her eyes off that goal,” Muir said. “Her ability to work for something for five solid years has been the most amazing thing to witness. Her brothers are so excited.”

After completing boot camp this summer, Wilson said, she plans to study environmental science at the U.S. Coast Guard Academy.

“That’s something I always had my mind set on,” she said. “I really love the ocean and the environment. I want to make an impact.”