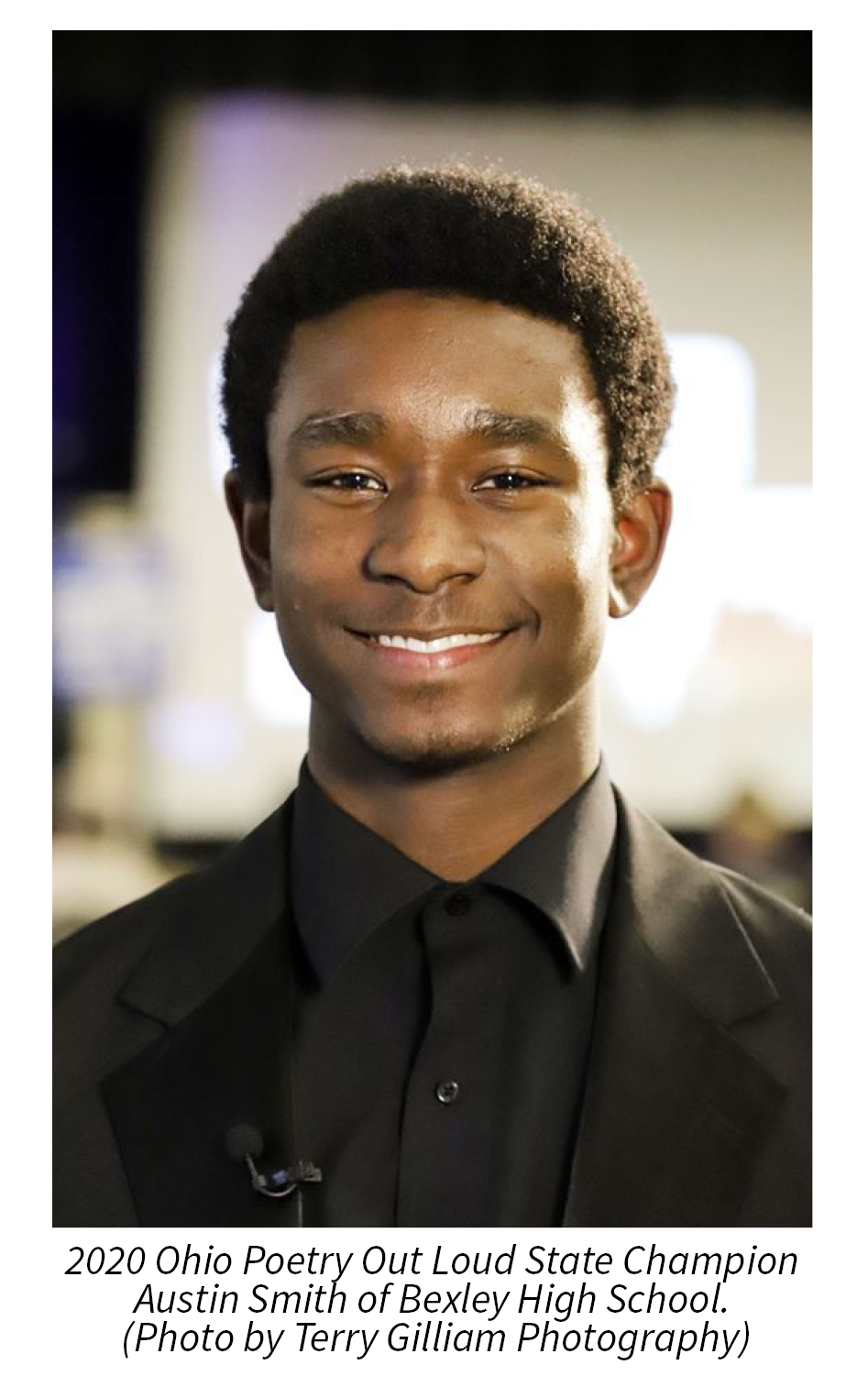 Austin Smith hadn’t expected to encounter a play-by-play of a football game in a poetry book.

“I was just looking through some of the poems and I saw one about football, and I thought about how strange it was, not only talking about football but the implications it had about life,” said the Bexley High School senior.

Smith ended up reciting this poem, “Wide Receiver” by Mark Halliday, as his first poem in the 2020 Ohio Poetry Out Loud (POL) State Finals on March 6 at the King Arts Complex, where he went on to recite two more poems that evening and win the title of State Champion.

He accepted his award on stage, beaming, with a few tears shining in his eyes, as he was surrounded by family and a cheering squad of his blue-and-white-clad peers.

“I was just thinking about making everyone who has gotten me to this point proud. That’s why I was on the stage crying,” Smith said. “I was trying to hold (the tears) back, but they escaped! It’s just a culmination of all the hard work that I’ve done and all the people who have helped me and supported me along the way.”
Smith was one of nine Ohio high school students who competed on the Nicholson Auditorium stage in the State Finals competition. As part of the national POL program presented by the National Endowment for the Arts and the Poetry Foundation, contests are held at the school, regional, and state level. State arts agencies from all 50 states, the District of Columbia, the U.S. Virgin Islands, and Puerto Rico participate every year.
Video by WOSU Public Media
Each student competing in the State Finals is asked to prepare two poems to recite in front of a panel of judges during the first and second rounds of competition. The highest-scoring students are then asked to recite a third poem in the final round. This year, for the first time in Ohio POL history, all nine state finalists were selected to recite their third poem.
In that final round, Smith recited John Donne’s “The Sun Rising.” This followed his moving round two selection: “Worth,” a poem by Cleveland-based poet Marilyn Nelson that vividly discusses the issue of slavery.
“I wanted one about racism and segregation, or just racism in general,” Smith said of his choice of Nelson’s poem. He added that when selecting his poems, it was important that he felt a connection to the message within the words. “You should choose your poem because you find something true with it. You just know when you pick the right poem because you’re able to convey feelings within it. Get to know the author because looking at their background might help you better your recitation.”
Smith said he tries to channel the emotions that are conveyed through the lines, stanzas, and phrases while he recites.
“With ‘Worth’ and ‘Wide Receiver,’ when I was reciting them, I would think of the saddest things that had happened in my life and just hope that that would help me to convey the true meaning and the feelings associated with the words,” he said. POL encourages students to learn about great poetry through memorization and recitation. The program helps students master public speaking skills, build self-confidence, and learn about literary heritage and contemporary life.
For Smith, POL showed him that poems often go beyond rhyming couplets to communicate life lessons and stories that resonate through their relevance. And the competition aspect gave him the confidence to share his skills on stage.
“If you told me as a freshman that I’d be up there winning a poetry competition, I’d look at you like you were crazy,” Smith said. “So, you never know! Give poetry a chance!
< Love of Classmates: Eileen Zelis Aria, ’02
Striking a Balance >